{Moving with a Large Family}

We ended up settling on the first house. My husband was sure it was the right fit. Although I really did like the house, I wasn’t 100% convinced. Even so, I had been praying and asking God to give my husband wisdom. James 1:5 says, “If any of you lacks wisdom, let him ask God, who gives generously to all without reproach, and it will be given to him.” I know a lot of people though who spend ages picking the house they are going to move into, they might be using someone like la jolla real estate but they just don’t want to commit straight away. My husband was happy to, but I just wasn’t convinced.

Sometimes I struggle between a logical decision and an emotional one. In this case, I could see how rational my husband was being but my heart still pulled me in a different direction. I ultimately submitted to him, but even though I could see the logic, it didn’t make it an easy decision. Some of you might not get that and others of you will. But that is ok – we all struggle with different things.

Looking back, maybe I should have prayed that we both be given wisdom, because I did internally struggle over what I wanted and where I could see our family living and what my husband felt was right. In the end, I’m thankful that I submitted to what he felt was right.

Back to the story: the next morning we put an offer on the house, and thankfully the couple accepted it even with a super quick closing date! As we waited in the plane, we saw a beautiful rainbow in the sky. If you are also thinking of moving just like we did and live in the Jacksonville area of Florida, you could, for example, look into something like house for rent in jacksonville florida to find out tips on how to rent a house out there, reasons to move to Jacksonville and much more. It is always worth doing your research before making such a big commitment. 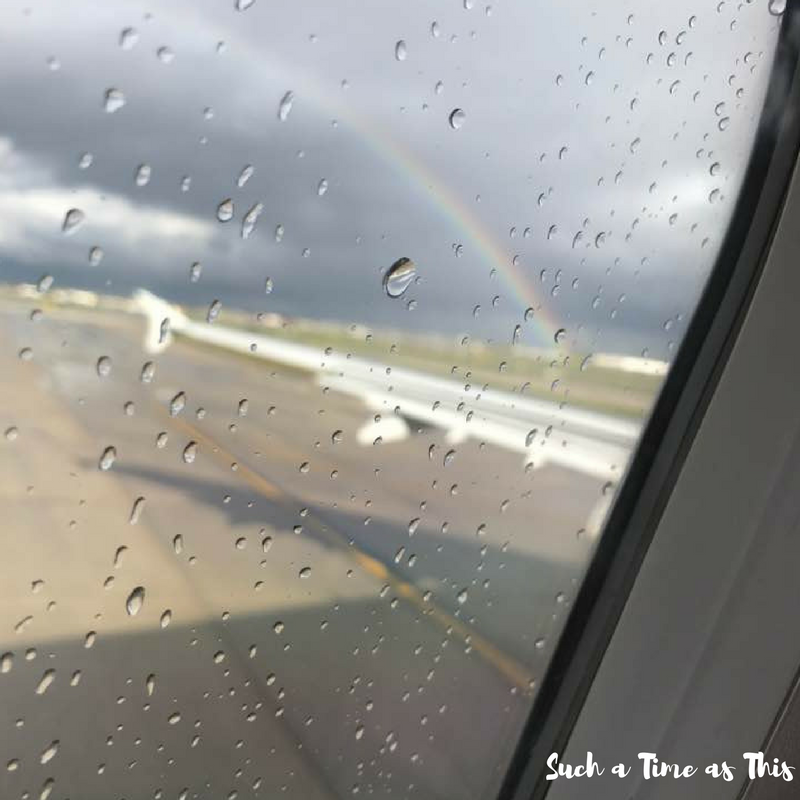 We traveled back home and got to work packing – even though we didn’t know if our house would ever sell. At least that is how it felt to all of us at the time. The whole problem with the way the kitchen faced and the front door, apparently.

Within a few days of getting back home, we had contacted our moving truck and hubby had ordered a bunch of moving boxes from the same company. They were scheduled to be there by Wednesday.

As it turned out, hubby was scheduled to be out of town on business for two days so during that time, which just added to my layers of stress that I already felt weighing on me.

So, in an effort to get some stuff done, my kids and I had decided to start cleaning out our kitchen. I knew that our new kitchen was quite a bit smaller (less cabinet space) than our current one so we decided we needed to sell or give away quite a bit of things. Thankfully, many women from our church were able to use what we were getting rid of, so I loaded all of the items onto our counter.

The next day, when hubby flew home, I was exhausted and so was he. I ended up sleeping in when I awoke to a text that we had another house showing. We decided to ask for more time because the kitchen was still a wreck from the day before and we knew we were going to start packing, so we didn’t want to put everything back away.

Our realtor quickly contacted us to let us know that the people were very interested and would want to come later that same day. We agreed and got to work straightening up and cleaning our house. A few hours later we had our offer and the house was set to close a few weeks after we moved out.

To say we were happy is an understatement. Things were finally all falling into place.

The rest of that month is a blur. Its a mixture of fragmented memories and pure exhaustion. I remember packing box after box. I remember hubby packing our kitchen (yay hubby!). I distinctly remember piles of paper plates. I really don’t care if I ever see another paper plate again. 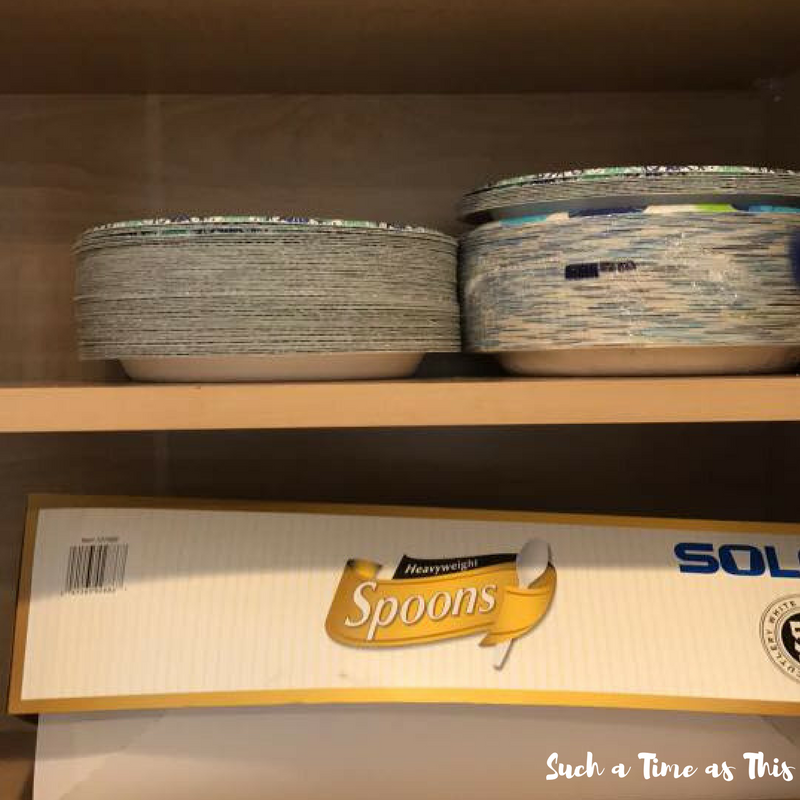 I can still see the piles of boxes taking over our dining room as we prepared for the move. The timing couldn’t have been better because we were done with school and so we just packed up everything we didn’t need and prepared to go. 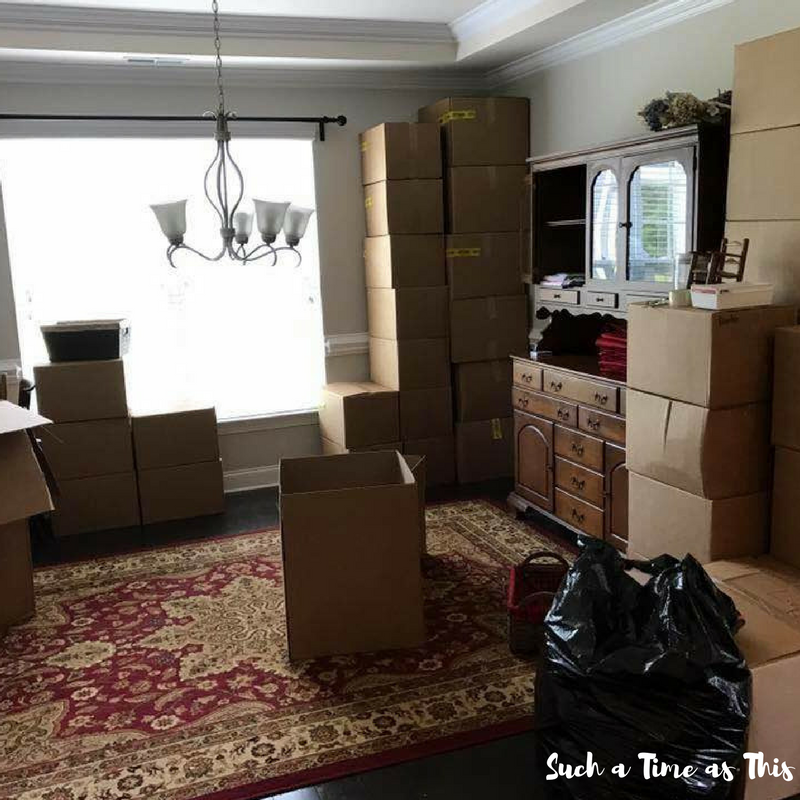 When the day finally came many people from our church stopped in to help. We had teens and strong men helping my husband and sons move some of the furniture and boxes. We packed our own truck through U-Pack. This service worked phenomenally. 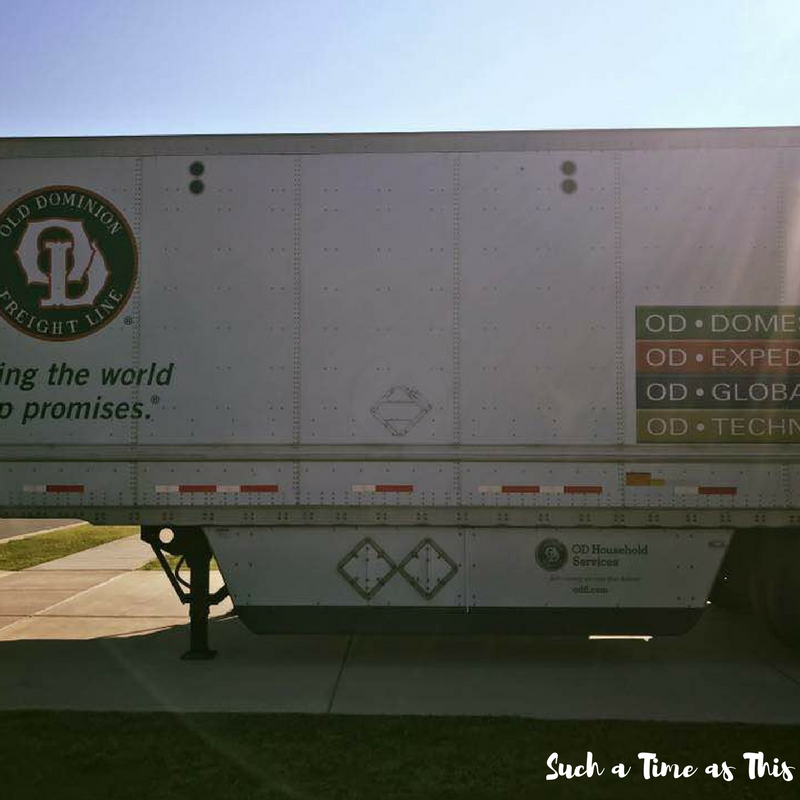 We packed -they drove. I was somewhat worried that they wouldn’t get there in time because they give you a window for delivery. We packed on Monday and they picked up later that night. We were told it could be delivered between Thursday and the next Monday. I called to double check the time on Wednesday morning and it had already been delivered to the holding dock in Illinois. How is that for quick service! Our stuff made it to our destination before we did! Thankfully, it is held in a storage unit (still in the truck) until the day of delivery (which we were able to choose). 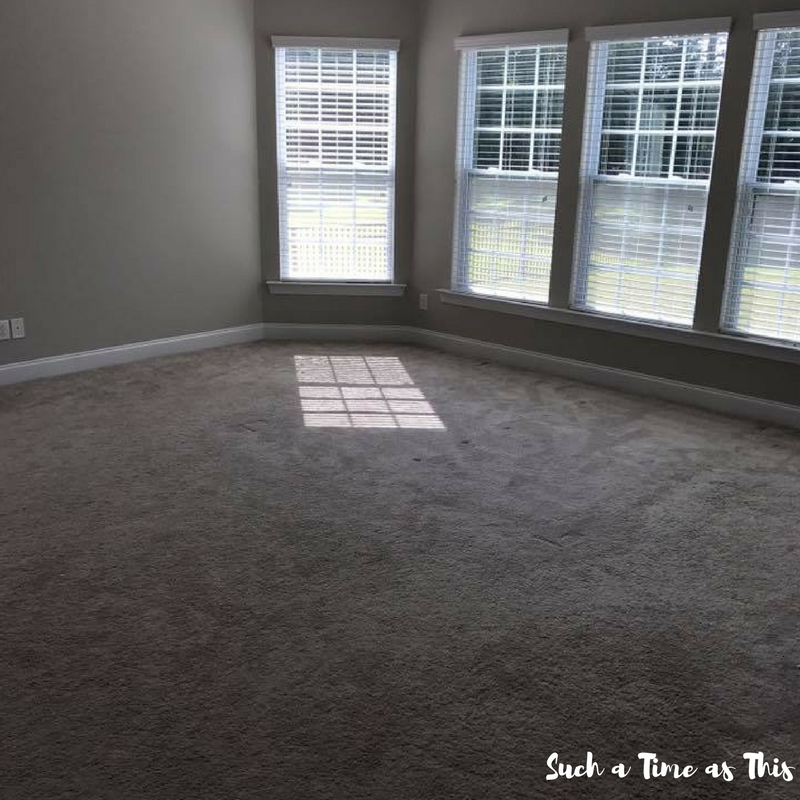 As the day went on, I began to clean up behind all the boxes and furniture that was being moved. By that night, our truck was packed and taken away. We were left with a completely empty house. The kids, hubby, and I cleaned the bathrooms, kitchen, refrigerator, pantry, and floors throughout to leave it nice for the new owners. Finally, we were ready to begin our trip across many states. 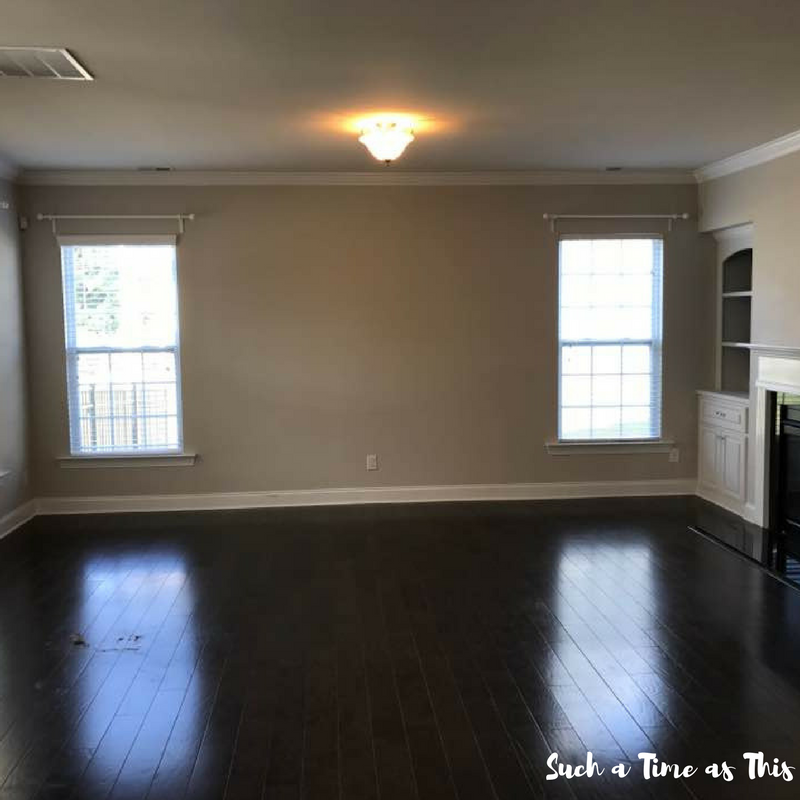 The next morning, we woke early and headed out. We decided to stop on our way to go see the Ark that has been built in Kentucky. That was a fun adventure. We stayed at a hotel nearby the first night and the next morning we got up early to enjoy our excursion. 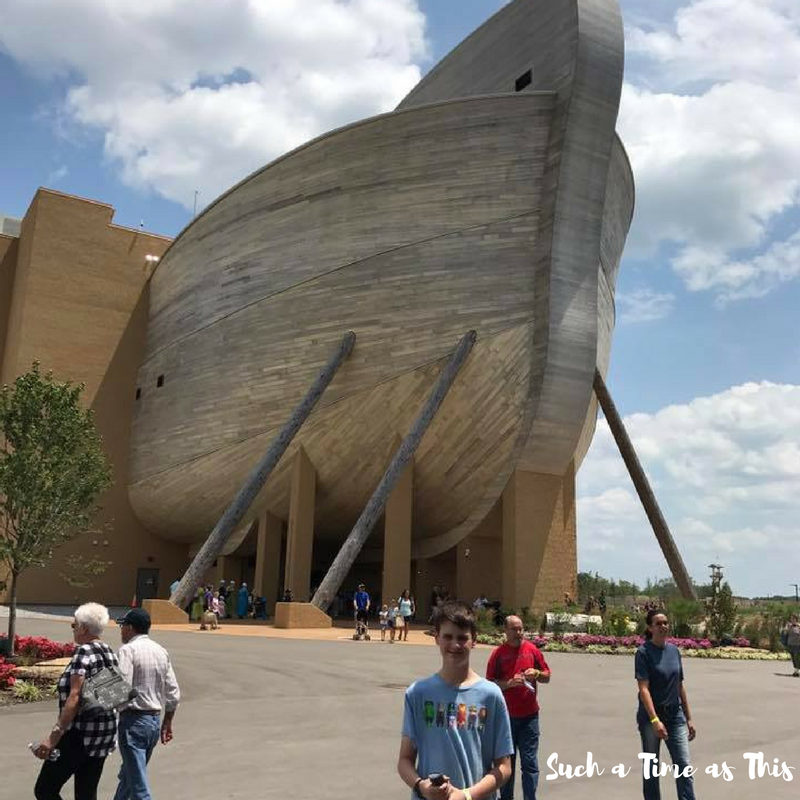 The Ark is massive and the kids really enjoyed it. It is so much more unique than a museum because it feels like you are experiencing life on the ark. 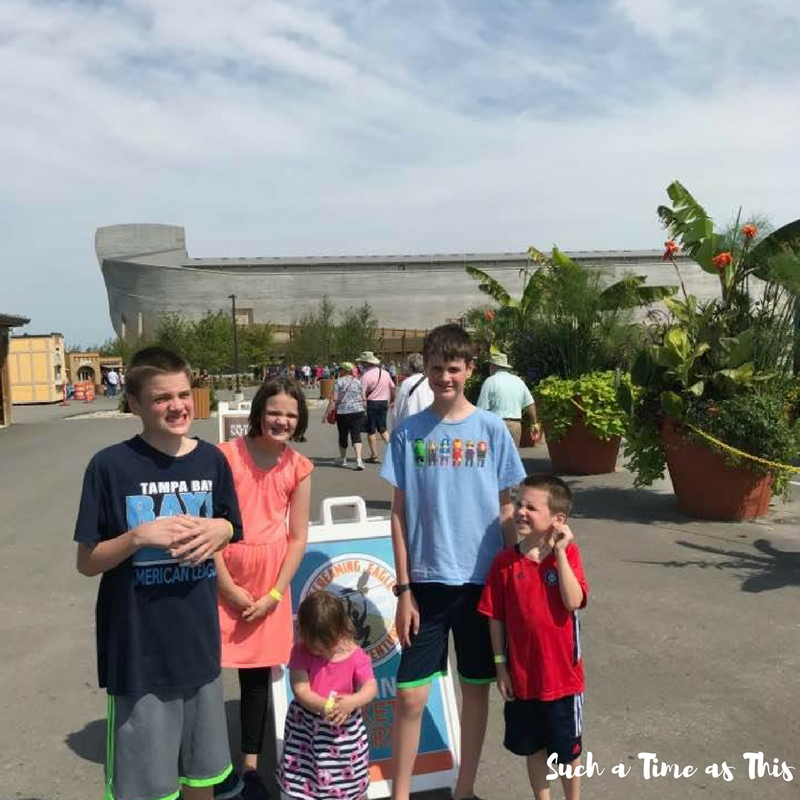 There were animals, life like containers (where food would have been kept), even the living quarters, there were movies to see and tons and tons of exhibits. If you and your family are thinking of going, we all LOVED it and highly recommend it. 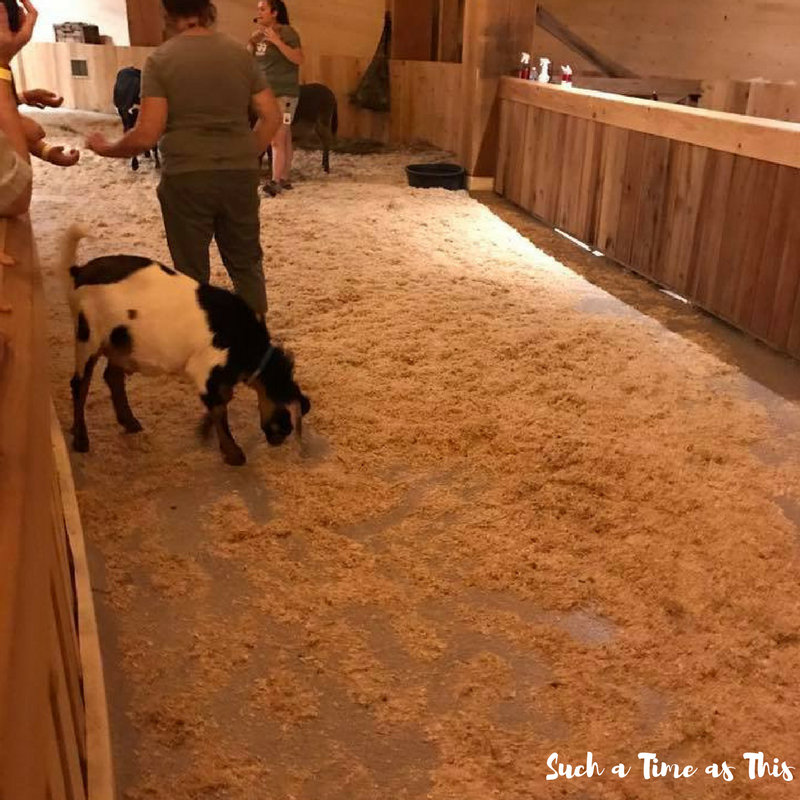 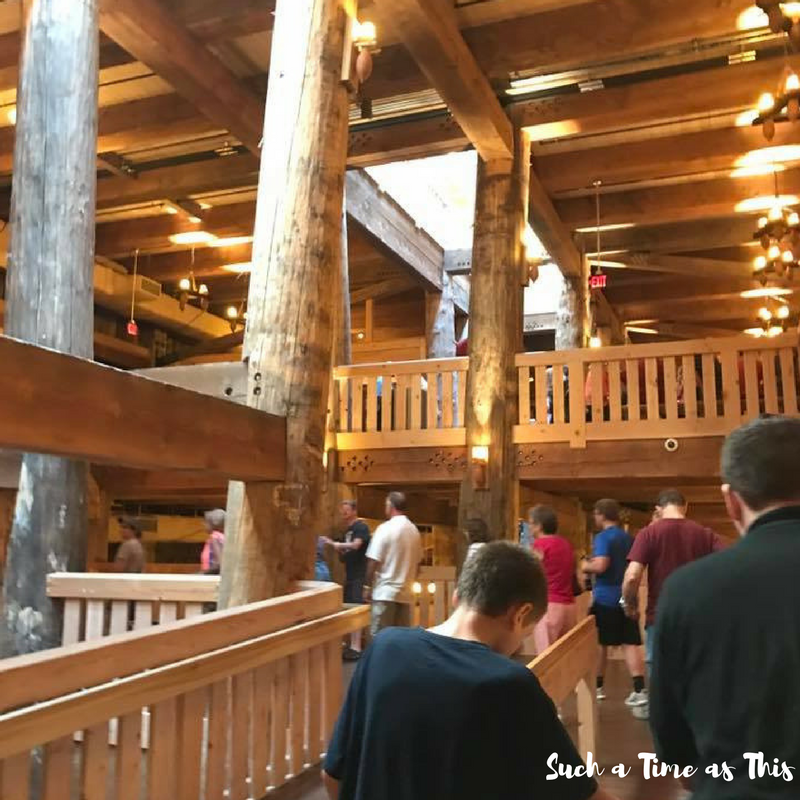 There were plenty of places to sit and rest. This was especially important because our oldest son has special needs, including some muscle tone issues and problems walking. He gets tired out easily. 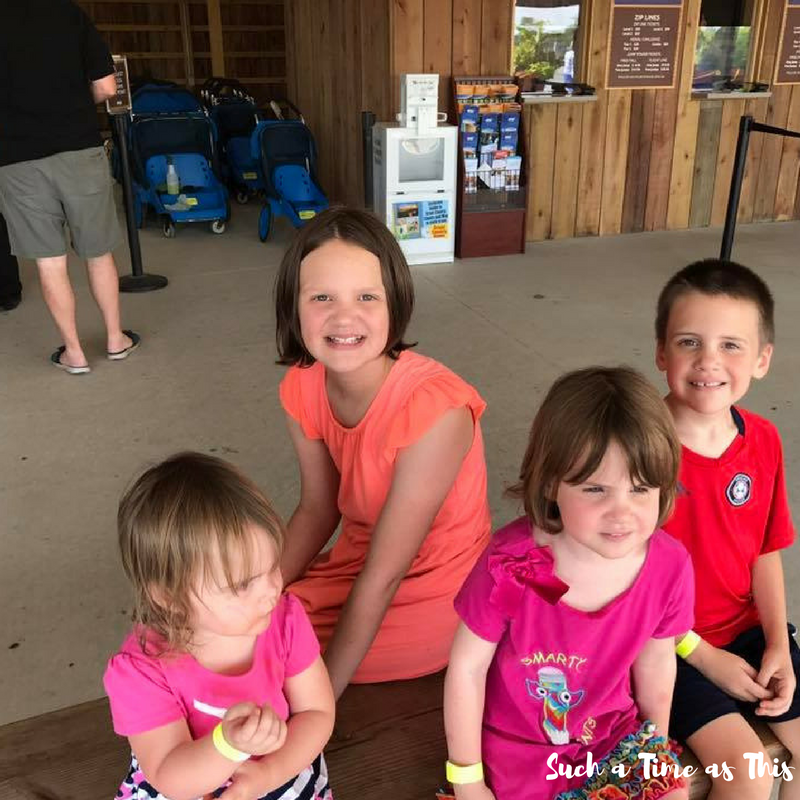 We stayed one more night in Kentucky and then the next day we made our way to Indiana before driving on to Illinois. Moving with a large family takes so much work, patience, and diligent work. Looking back, I’m really thankful we chose to break up the trip like this. It made it a little less stressful (especially for the kids).

The next morning our moving truck arrived and Hubby and some hired movers unpacked. It was so nice to sleep in our own bed again and to start the process of unpacking.

Check back tomorrow for Part 4!

Our Big Move: Part 2 {Moving with a Large Family}
Reset {How This Move Has Changed Me + Our Cleaning Schedule}