Birth stories are always very personal and raw.  I wrote this one just a few weeks after the birth of baby number 7.

It was the week before Christmas, when I woke up around 1 am to constant contractions.  The contractions began prior to going to bed but they were mild and sporadic.  By 1 am they came every 4 minutes steadily.  I walked around the house trying not to disturb anybody.  I tried rocking on our glider, sitting on the birthing ball – even hopping in the shower.  Nothing made them go away.  I eventually laid back down and at about 7am I fell asleep for an hour.  We called our in-laws who were planning on coming up for the birth.  They started heading our way.

I wore my new #lularoe dress today…then I decided it's time to have this baby. It barely fits…1 week to go.#pregnantbelly . . . #39weekspregnant #9monthspregnant #ameliadress #lularoeamelia

By Tuesday, my due date, I wasn’t experiencing the steady contractions any more, but I did have a scheduled appointment with my midwife.  Hubby and I headed in to see how things were progressing and to check in before our scheduled induction for the next day.  (Because of some complications with our last baby, we chose induction around my due date. That – along with my own health issues – made it a clear choice).

At the appointment, the midwife thought I was a cm or less dilated and not very effaced but because of the position of my cervix – she was having trouble reaching.  She couldn’t do a sweep.  However, she was concerned about little guy’s heartrate because it sounded like it was low and experiencing de-cels.  She hooked me up to a NST for monitoring of about an hour.  After an hour, although his heart rate was a little low it was still in the normal range and she decided to send me home.  I was due at the hospital at 7am and I was relieved to know we would be meeting the little guy soon.)

That night my in-laws, the kids, hubby and I decided to go out to dinner and throughout dinner I began to experience sporadic, although strong, contractions.  It didn’t seem to amount to anything and we finished dinner and then headed back home.

Early the next morning we made our way to the hospital at the scheduled time.  I was anxiously waiting to find out how they were going to do the induction.  As I’ve written about before, I’ve experienced so many different types of inductions including cervidil with pitocin, prostaglandin gel and a foley bulb catheter followed up by pitocin.  I recently read that cervidil isn’t recommended to women who have had more than 5 vaginal births because of risk of over-stimulating the uterus.  I was beginning to feel uneasy about how things would go.

After arriving at the hospital, the nurse went through my health history and then tried to get an IV started.  That was not an easy task and it took her finding two other nurses and four sticks of my hands and arms before one was placed successfully.  When my midwife came in she did a very quick ultrasound to confirm a head down presentation.  She found I was already 3cm and 30% effaced.  I dilated 3 cm since I had seen her in less than 24 hours!

The Beginning of Labor

She said we would start the pitocin and see how things go from there.  They started pitocin at 10:15 and nothing much happened for the first two hours.  Checking me again around 12:15, I was about 4cm and 50% effaced.  At that point, she asked if it was ok to break my water in the hopes of getting this progressing a little quicker.  Thankfully the water was clear and everything was going well with baby.

It was slow moving from there … I began having contraction but nothing major and every 30-45 minutes the nurse would pop her head in the room and increase my pitocin level.  By 5 p.m. the contractions had become slightly more intense but still not too bad.  I felt the baby moving a little further down.  I was about 6 cm.  Frustrated, I knew I hadn’t gotten to a point of feeling a lot of pain yet.  It was still manageable at this point.

Growing slightly impatient, I continued to sit on my birthing ball and rock during the contractions.  I tried to sit in the bed during a contraction and the pain instantly magnified.  The nurse allowed me to drink water but not eat during this whole process … so I kept asking for a refill on my water bottle and chugging ice-cold water to keep my mind off any hunger.  At about 5:50 I told hubby I needed to use the bathroom.  This was an ordeal because of being hooked to so many IVs and monitors.  Scared of getting stuck in the bathroom during a contraction, I moved swiftly to get back to the side of the bed.  Chills also began during this time and my nurse commented that it might be transition.

I made my way into the bathroom and as soon as I stood up to leave the room a contraction hit and I needed to hold onto my husband so that I wouldn’t fall down.  The nurse asked to check me.  I told her I did because I was having trouble knowing what to do during the contractions.  “Almost completely effaced,” she announced “8 cm!”

It was then that I wondered how I could go on like this.  I wasn’t just afraid of the pain, but of what lied ahead.   Also the panic that set in that I wouldn’t know when it was time to push.  These fears were very irrational because I’ve done this so many times before and I always know when it is time.  I think it is easy to second guess ourselves – especially when we feel so vulnerable.  I sat on the birthing ball during another contraction and then tried to stand during another.  They were coming every 2.5-4 minutes.

The nurse and the midwife started making suggestions of a squatting bar or sitting backward on the bed – holding on to the top of the bed.  I feared being trapped, so I declined. I sat on the birthing ball instead. 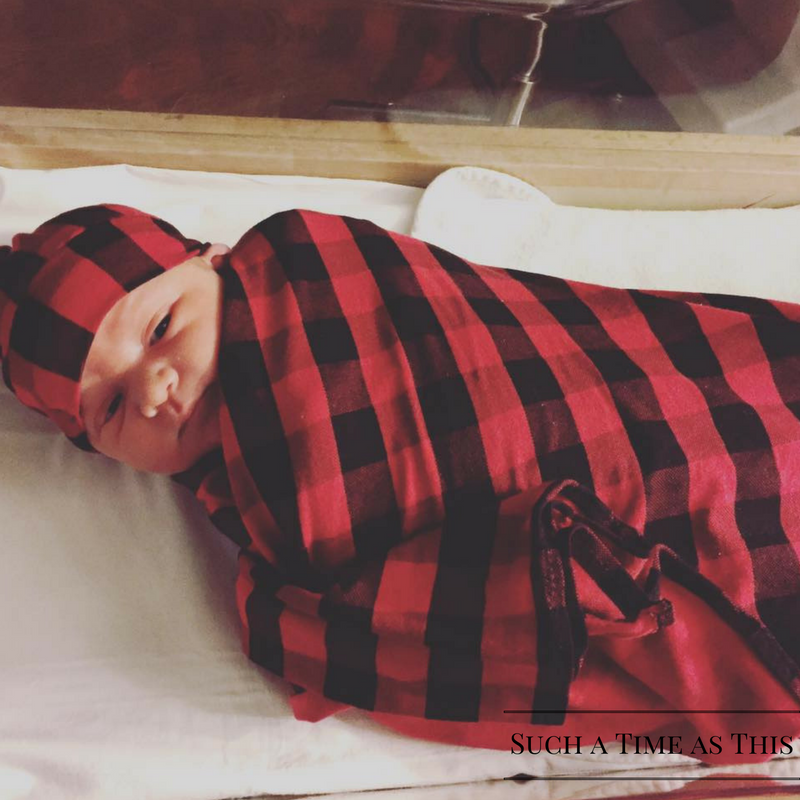 I quickly jumped on the bed because my midwife thought I was close.  She checked and I was close to 10 cm but not quite there yet.  One more good contraction and baby would come … and that is exactly what happened.  I tried pushing gently at first and then she told me give one good push to move him down.  In about one – maybe two pushes, as I prayed for help from the Lord, baby’s head and body was out.  At around 6:30pm baby was born. 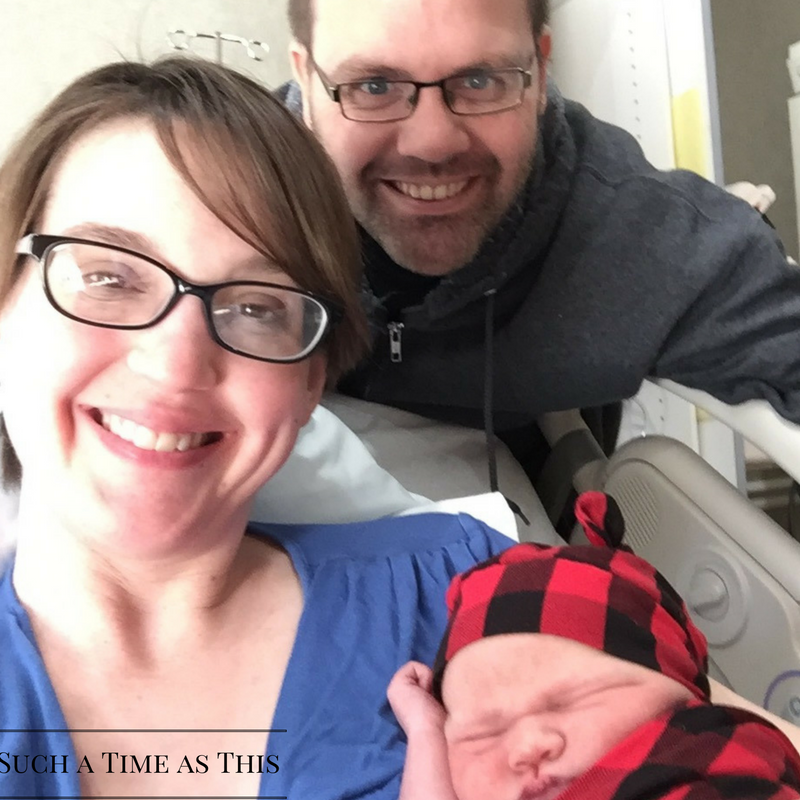 Our baby number 7, Baby Philip, was born with light blonde hair and dark eyes at 8lbs 6oz and 21″ long.  The nurse placed him on my chest where he lay still for a few seconds and then let out a little cry. Thankfully, he had no complications like some of my others had experienced.  His skin looked healthy and pink. Both my hemoglobin and platelets were great the day that I had him.  All interventions were avoid.  Although, prior to the birth I feared having blood products or transfusions, the only extra measure the midwife gave was an extra bag of pitocin after delivery to make sure my bleeding stayed under control.

The Lord was surely with us throughout not just this delivery but throughout the entire pregnancy which was trying and hard both physically and emotionally.  God didn’t promise things would be easy – but if you are following him he does offer you peace, joy, and comfort.
This verse seems so fitting:

Psalm 18:2 The LORD is my rock and my fortress and my deliverer, my God, my rock, in whom I take refuge, my shield, and the horn of my salvation, my stronghold.

The Lord is our deliverer. He is gracious.  And He is with us. Always.
Thanks for reading my birth story!  Feel free to share yours below! 🙂 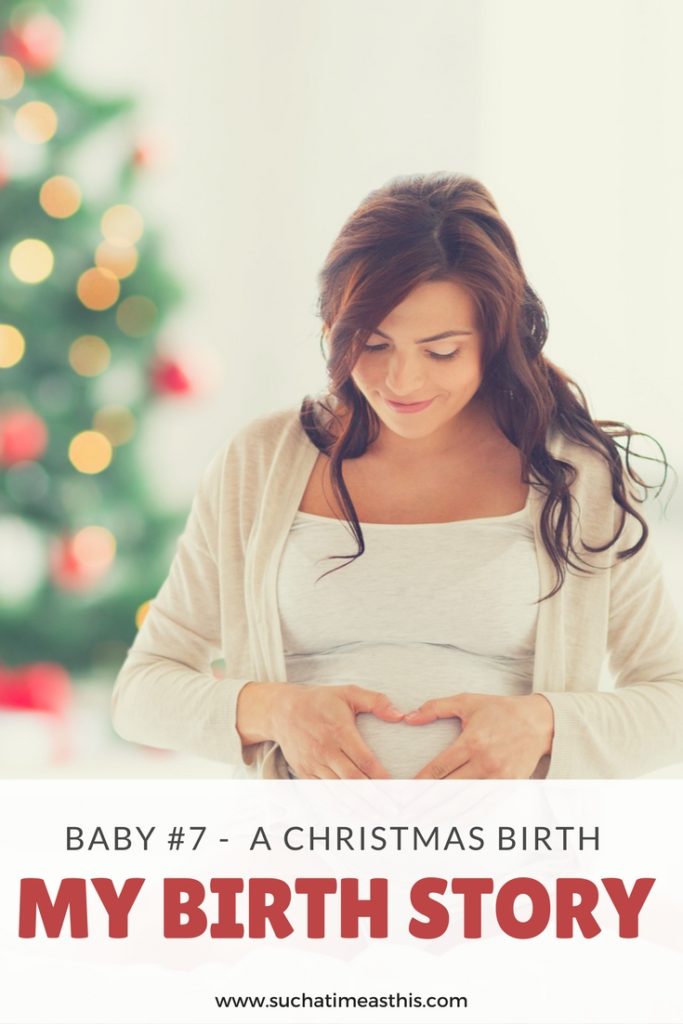 You would think after six other births, the birth of baby number 7 would be a piece of cake, but just like all babies – all labors are different!  I’m thankful for my support team of my husband, wonderful nurses and my awesome midwife who helped me accomplish the goal of a natural birth – even with an induction.

Interested in this birth story?  Feel free to check out our other pregnancy and birth posts.

Induction is not Always a Bad Word

Stop Fearing the Unknown and Go For a Natural Birth