“Play this game with me mommy” his soft voice echoes from across the room.  I pause, as I rinse soapy dishes in the kitchen sink.

Just one second.  I dry my hands on the towel and sit next to this skinny sweet smiling little 13-year-old boy.

“I will win mommy.  You think I’m going to win? I’m pretty good.”  There it is.  The good old fashioned smack talk falls from his lips.

Life wasn’t always like this for Adam.  The years shuffle before me like waves crashing through my memory.

Life’s been hard.  It’s been a journey full of hills to climb.  I press the screen, to roll my virtual Yahtzee dice and I think.

The days when he couldn’t communicate.  He couldn’t speak words that anyone would understand.  There were just sounds, dull sounds.  That was tough.  There is nothing that can replace the joy I felt when he learned to utter a sentence.  The day he learned to talk is etched in my mind, like a work of art so carefully crafted.  “Teacher said kind-er-gar-d-en… Oh – Teacher said eat “gogi” … The teacher said “no more”…” That was almost 8 years ago now.  8 years since he truly became verbal.

I remember bus rides, and new teachers, and the struggles.  I pass the tablet back to him.  He methodically presses the screen waiting for his dice to appear.  In the beginning, nothing seemed to make sense, once he lost his milestones life got different.  It was perplexing. Frustrating.  Nobody saw it happen – how he gently slipped into this new reality.

He was healthy.  He was happy.  His monthly milestones forever encapsulated in my mind.  I’ve rolled those numbers around in my mind too many times to count as each doctor and therapist and specialist asks me to recite it. Again and again.

There was no foreshadowing.  Nothing until we realized he had changed and he was who he was now.

“Your turn, Mommy.” He says as he hands me the shiny compact screen.  Autism sometimes reminds me of what Alice must have felt when she fell head first into Wonderland.  It was once new for me.  And it was once strange. There were many colorful people helping us along the way.  Some more than others.  Some more educated on the effects of autism than others.

The truth is there are so many pieces to this puzzle.  So many it overwhelms my mind.  My son has had chronic digestive problems, food allergies, neurological issues, food aversions, food cravings, sleep disturbance, speech delay, fine motor delay, gross motor delay, cognitive delay and a whole host of medical tests and assessments, and clinical evaluations from a slew of medical professionals.

And the years march on.  One after another.  There are people who stand out in my mind who were brutally honest with me.  I smile.  Sometimes the truth hurts but it is still the truth.  These are the people who helped and weren’t afraid to jump in and get right in the thick of things.  And I’m thankful that even though still in Wonderland, we found friends.  Friends who accept him.  And the ones who love us.  The friends who don’t judge the outward behaviors, but love him for who he is.

I look at my son and I’m grateful.  I’m grateful for how far he’s come. For each step of the journey that led into the next.  For the growth, I’ve seen in the past year.  It wasn’t always like this.  There was month upon month of behavioral episodes.  Then the delays, the days of disappointment.  So many tears.

We didn’t know much as we started out on this journey, but we knew that Autism wouldn’t steal our son’s childhood.  We insisted that he would be treated just like our other children.  So, for a while it meant that if they went to a movie and icecream, then so did Adam.  If they went to the park, so did Adam.  If he couldn’t handle leaving the house, then we stayed at home.  We missed many library days because of behavior.  I realize now, that that’s ok.  It wasn’t always easy but it was always worth it.

I look outside as the breeze is blowing.  It’s cold.  It’s bitter cold as if Winter was upon us.  I turn on the heat.  So strange to think it is still April – just days ago it was 70 and sunny.  This is what autism is like.  Autism is like never knowing what the weather will be.  What behavior, panic, meltdown, episode with the wind blow in? Unpredictable at best. Autism therapy really helped my son and I will always be thankful for it.

There are days when my son will fool you with his charming smile and friendly disposition.  Or the days when you will never doubt again.  Some days are just like his stack of medical records, are recorded in memories.  Memories of his.  Memories of mine.  Like how I know, when I see him pull a little closer to me as we walk by a landscaper, the intense panic attacks he had as a 7 year old to leaf blowers and lawn mowers.  I remember, when he struggles to bite and swallow a piece of food, the years of throwing up because of textural sensitivity, and the years of food, speech, aba, and occupational therapy he endured.

He looks at me with his big glimmering eyes, “Yahtzee!” He exclaims.  “You think I’m going to win?”  I look at him and whisper, “I think you are.”  You beat autism when you research, and you do the evals, and you take him to therapy, and you work at it.  You don’t give up. Ever.  You keep fighting it.

Autism tried to rob Adam of a happy childhood, but instead, he grew up among 5 siblings that love him.  That hug him.  Who take their time to play games with him.  And engage him.  Or will watch his favorite game show with him.

When I look at my son I don’t see Autism.  I see Adam.  I see the person that Autism tried to steal from me.  A warrior.  I see a fighter.  A little boy who didn’t give up. 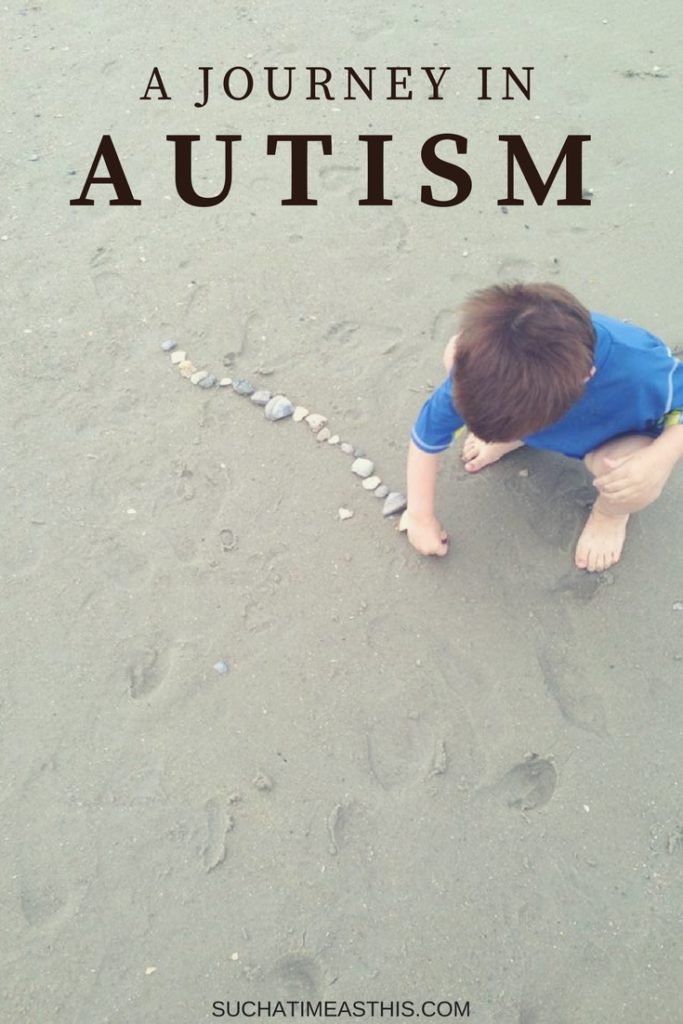