That Every Woman Should Know About

If you are anything like me, you are busy.  You are so busy with your day to day life – all the cleaning and tidying.  The challenges that come with small children, the exhaustion of having toddlers, the time that withers away with keeping up with your active teenager.

We are busy moms.  September is a fast paced month.  The start of school, the end of Summer vacation…it is a whirlwind as our life spins around us.  For a second we are suspended in time as we think of all that needs to get done.  September brings another special reminder…one that you probably didn’t even know about, or at least haven’t given much thought to.  It’s the reminder about Ovarian Cancer.  First let me tell you a quick story…

It all began 15 years ago.  It was a humid July afternoon when the pain came on.  It was so strong she could ignore it no longer.  As she doubled over, she hoped that the pain would fade.

Her youngest daughter’s wedding was just days away.  So many plans, so much to do.  She sat, clutching her abdomen. Her older daughter quickly asked what was wrong.

Worried, her daughter quickly prompted her to get checked by a doctor.  Fearing that it might be appendicitis or something equally as bad, they made their way to a hospital emergency room and waited for the results of some tests.

My mom waited until after the wedding festivities and after my week long honeymoon to tell me the news.  I remember it well.  I was standing in my small apartment’s kitchen when I answered the phone call.   It was a corded phone.  You know the type?  The plastic curls attached itself to the wall of my kitchen.

I answered the phone not knowing that what she was about to say would change my life – my family’s life forever.  It was at that moment that my mom relayed what she had kept hidden for almost 2 weeks.  My mother had Ovarian Cancer.

A few days ago September came again.  Year after year September is Ovarian Cancer Awareness Month.  Did you remember to wear teal in recognition of this type of cancer?  No?  Me, neither.  That’s because Ovarian Cancer doesn’t get as much publicity and recognition as many other types of cancer.  We aren’t as aware of it as we should be.

Let me tell you, before my mom was diagnosed, I never thought of it, either.  It is not something that doctors talk a whole lot about.  “It is the fifth most common cause of cancer-related death in women.” (source)  Did you know that it is also called “The Silent Killer“?  That is because many of the symptoms are easy to ignore.  It is easy to tell yourself it is something else.   The cruel irony of this disease comes with this statistic: caught early, there is a 90% cure rate.  The problem? It is very difficult to catch early.

As women, we know we need to go to the gynecologist to get checked for cervical cancer – so yearly, we drag ourselves in for an internal and a pap smear.  Let’s clear something up real quick: that test checks ONLY for cervical cancer.  It will not tell you if you have ovarian cancer.

We are told to get our mammogram and pap test but are never warned or told the risk of ovarian cancer.  The easiest way to diagnose this type of cancer is through the use of transvaginal ultrasound.  This is not routine – not even for close relatives of a person who has ovarian cancer.  There is a blood test called the CA-125, but I’ve been told it can yield a false positive.  It is not accurate in pre-menopausal women.  It can also give a false reading if you have other disorders including endrometriosis.

Some may think a quick pelvic exam would give an indication that you have ovarian cancer.  My mom went for all of her check ups and hers was not diagnosed by her own doctor.  It took her driving to the ER and getting checked there to find it.  Her tumor was the size of a grapefruit.  It wasn’t small.  It wasn’t minor.  It was stage III by the time it was caught.

So today, I want to share the common symptoms of ovarian cancer.  They call it The Silent Killer for a reason.

You can see that these can all be written off as different ailments.  There is no one clear sign that someone has this type of cancer.  Not all of the symptoms have to be present.

The truth is, there is ongoing research but you don’t have to meet these risks to develop this type of cancer.  My mother was the first one in my family to have ovarian cancer.

My mother lived for three years and one month with Ovarian Cancer before she passed away.  She stayed with us on earth just long enough to meet my first child.  I cherish the years I had with her.  I see that time as a gift.  She was able to see me get married and graduate college.  She and I talked every day on the phone through my first pregnancy.  We were somehow able to squeeze all the mother-daughter time and advice that I would ever get into those three years.

The end of her life was very rough.  It was horrible for her and it was horrible for my dad who took care of her every day, effectively becoming her nurse.   There came a time when she could no longer eat and was completely on feeding tubes because of this monstrous disease.  The cancer continued to spread despite a complete hysterectomy, the endless rounds of chemo and even the experimental treatment that she underwent near the end.

I know, through talks with her in the month before she passed away, that she passionately believed that not enough research had been done.  We don’t know why my mom developed this.  My mom was the healthiest person I knew.  I’m thankful for the time I had with her.  So, I write this for my mom and I write this for every woman out there who is currently suffering with this terrible disease.

I wish I could tell you that there is an easy, routine test.  There isn’t.  If you have any of these symptoms and you are tempted to brush them off – don’t. Call your doctor and asked to be checked.  Do it for my mom, do it for your children, do it for you.

Don’t let this silent killer stay silent.  We need to fight with all we have.

For more info on giving for research go here: www.colleensdream.org. 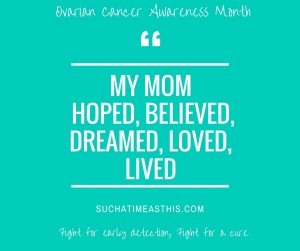