Dreams.  All of us have them.  Some of our dreams our big and some small.   Some of our small dreams are big dreams to others.  Like today when I read that a little boy wrote to the White House to ask President Trump if he could mow the White House lawn.  His dream came true when he was able to do just that.

Most of you know that my oldest son, Adam, has special needs.  He was diagnosed with Autism and Cerebral Palsy as a young child.

We knew at an early age that Adam struggled with his gross motor skills.  We later realized that he had fallen further and further behind his peers in other skills (fine motor, speech, and cognitive skills).

As the years marched on, we hired a group of therapists that would work with Adam, many right out of our home.  We created a list of life skills and goals that we wanted our son to achieve and learn.  I was taught, early on, by his ABA therapists that we need to always know what rewards him.  We used a lot of positive reinforcement in his sessions to motivate him toward good and positive behavior.

One thing that many people don’t realize is that for years I would long to figure out what truly interested Adam.  He wasn’t like our other kids who would gladly give us a list a mile long at Christmas or birthdays.  If we asked him what he liked or what he wanted he would usually state, “I don’t know.” We were left coming up with our best guesses for prizes and presents.

As Adam grew, I carefully observed his likes and dislikes and I began to understand more of what made him tick.  In the next few weeks I’m going to share not only our journey to this place but what he really loves and doesn’t love.

Because of his special needs, he usually didn’t show much care for what the rest of boys his age liked.  In fact, when he was a younger child, he didn’t play with toys in the same way as my other kids.  He didn’t participate in imaginary play.  He despised interlocking blocks.  He didn’t have much interest in “sports”. 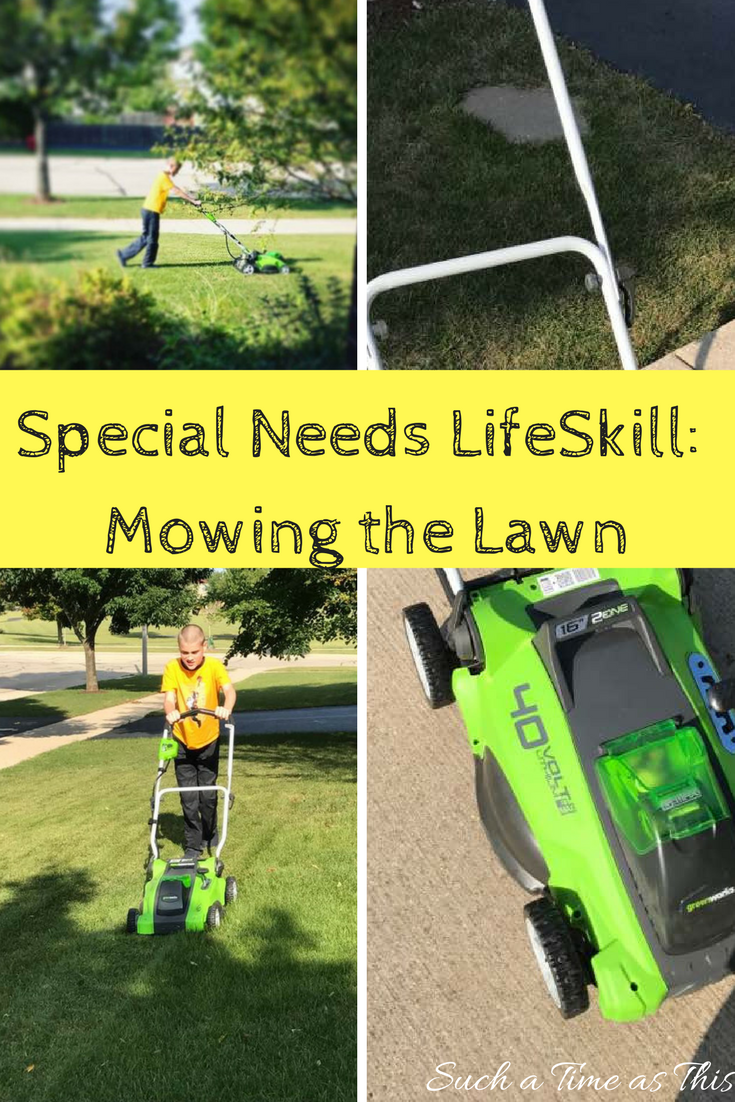 One day, Adam’s therapist sat down with us at the kitchen table during our snack time.  Adam began to inquire about what he could be when he grew up.  This was something that would come up frequently but usually he would say he didn’t know or sometimes he would throw out the idea of  being a doctor (because he had just come from a specialist’s appointment).

This day – this day was different.  It was this day that he asked if he could mow yards when he was grown.  I remember glancing at his therapists and feeling like we had just made a mini breakthrough.  It seemed like something practical that maybe he could do.  At the very least we know it was definitely something he was interested in.

Because of Adam’s physical disabilities there would have been no way for him to push a lawnmower at the time and I didn’t want to risk him riding on a riding lawnmower.  He has spastic diplegia and high muscle tone in his lower body and low muscle tone in his upper body and low strength.  There was also the issues of the loud sounds that lawnmowers make (he has very sensitive hearing and auditory processing disorder).

Faithfully, every week when my husband went to mow the lawn, there was Adam.  First he would stare out the windows in random rooms of our home – following him in a way.  Later, as he got older and was more accustomed to the loud noise, he would go outside and watch him.

And then a few months ago our big move came.  My husband decided he didn’t want to transport our gas run push mower in the move.

He knew he would sell it and buy a new one once we moved in.  So, when it came time to buy a new lawnmower he ended up going on Amazon and buying a GreenWorks 40V 16-Inch Cordless Lawn Mower which, because of Amazon Prime, came delivered to our home in two days.

This Lawn Mower is a push mower that is completely battery powered.  Can you say – AMAZING?  This lawnmower has solved all of our problems.  Here’s how:

no messing with gasoline

very easy to start up (just a push of a button)

it is very, very, light to push

It charges in just a couple of hours – so no problems with that, either!

Now, for the best part of all.  A few weeks after we moved in, Adam walked up to his dad as he got ready to mow the front yard.  He then quietly asked if he could do it.  Words cannot express how beautiful this was to watch.  For the first time in his life he had asked.  For the first time we were able to say yes.

My husband carefully explained how to do it – but Adam needed barely any instruction.  He had been preparing for this day for so long.  In that moment, a small dream came true for my son.

I’m sharing this today because I absolutely LOVE this lawn mower.   My boy loves this lawnmower.  Even his younger (12 year old) brother loves using this lawnmower.  I’m thankful that this dream of mowing the lawn with autism and other special needs has come true and we get to check the box on another life skill.

Sign up to receive more life-skills to your inbox!

5 Fun Baby Finds to Help You Stay Organized as a Mom
Facing Darkness: A Movie to Watch