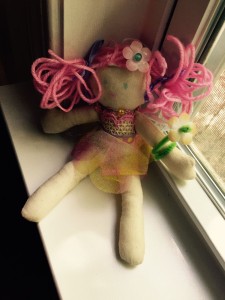 Ahhh, Summer.  You get a break from school work only to find it’s 100° outside. The kids are miserable and so are you.  Enter crafts.  I love crafts.  They give a great escape from the dreaded screen.  They also give an escape from the heat of Summer.  They are fun for the kids and give them something new to learn while using their imagination and their creative side.  The downside to crafts is that they can take a lot of time for us moms.  Sometimes, we want to have a few minutes of peace to catch up on some reading or cleaning … whatever needs to be done.  Sometimes, we do not know how to do said craft.  Sometimes we just need a break.  So, I present to you:

The Best and Worst Kids Crafts for Busy Moms

Let’s start with the worst first.  This RobotiKits Solar Kit looked awesome.  The 10 year old went nuts when he realized he could build his own robots that were solar powered. 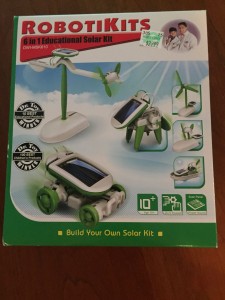 Then upon opening the box we realized how complex this is.  It says 10+ on the package and while it is possible for some 10 year olds to put it together, it was very difficult for us.  It took both my husband and 10 year old son over an hour to assemble one of these.

The clincher? It didn’t work!  It was put out in direct sunlight and never charged correctly.  To be fair, it is very possible that we didn’t put it together right.  As I stated above – we had a very hard time figuring out how to put it together.  However, we are unsure of this product.  Because of that we listed it:

The 8 year old picked out this cute little bunny craft from Hobby Lobby.  This is a hand sewing project.  We started this out at the same time the boys began their robot project above.  We got about half-way through it in the 90 minutes we were working.  We ended up stopping and taking a break.  We had many problems along the way.  We had a lot of problems threading our needle.  I would suggest that your child will need help with that part.  There are also some issues if you don’t know how to do a blanket stitch.  The instructions weren’t great and you will need *some* sewing knowledge.  You do not have to be a seamstress to make this bunny – but you will need some background on hand sewing. 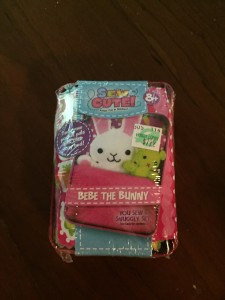 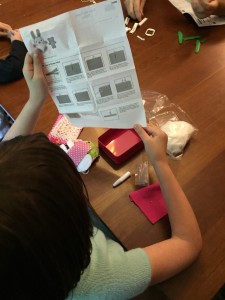 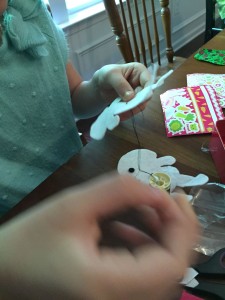 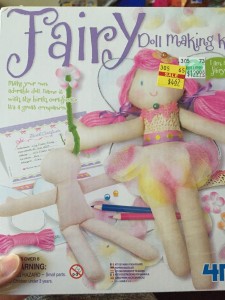 We came across this fairy making doll kit on the clearance rack of the craft store.  It looked fun!  This is a little bit more mom-intensive than I was hoping. 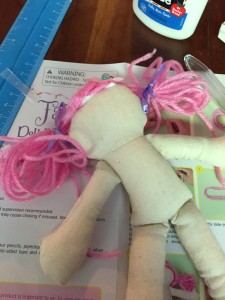 However, it was honestly a lot easier than the bunny.  No sewing required – just gluing, taping, cutting, measuring and drawing.  My daughter was able to read the directions herself.  A younger child would need much more help.  Nevertheless, this was a fun and creative kit that she and I enjoyed.  It took about an hour to complete.  The directions were pretty straightforward, too, which is always nice. 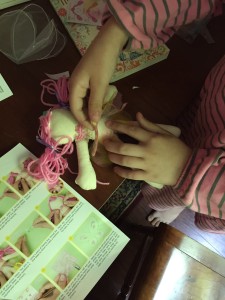 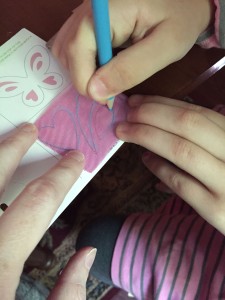 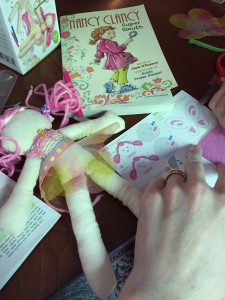 We then tried Perler Fused Beads

If you’ve never seen these beads before, they are small beads (most likely a choking hazard for younger kids) but they come with a small peg board either in a shape of an object (like a car) or in a plainer shape like a square that you can use to make a variety of things.  Once you place your beads where you want them, it is time to use a hot iron with a small piece of protective parchment paper (included) to iron them until they slightly melt.  When this happens the beads fuse together and they are set together.  Off comes the pegboard and once cooled, the children can play with their new toy. 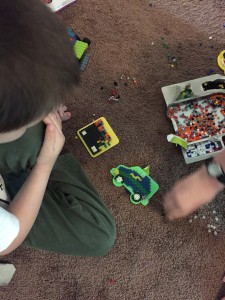 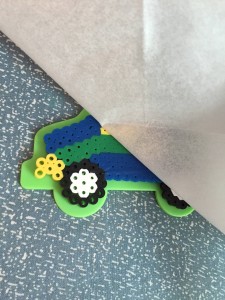 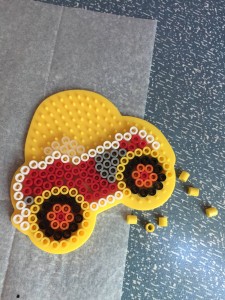 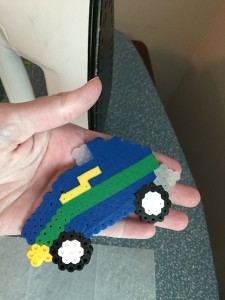 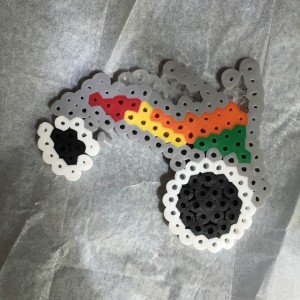 This kit was a huge hit.  It was fairly easy for all of them to make.  It took time but not my time.  They were well entertained.  They could follow the directions or make their own design.  They liked it so much that it landed me back at the craft store searching for more kits. 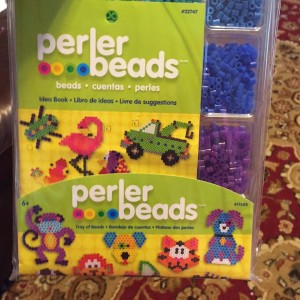 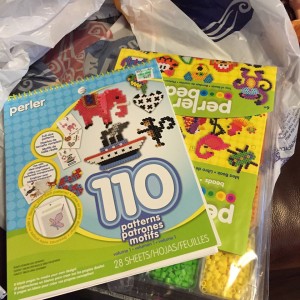 Instead, I found that they sell a large kit of beads and a separate book.  This was way better than I expected.   This pattern book comes with 110 patterns – to entertain the kids for hours.  Not only that, but it comes with several sheets of paper in the back of the book where they can draw their own designs! A 4 year old and 10 year old can both be entertained by the same project with little help from Mommy? Who would have thought that! 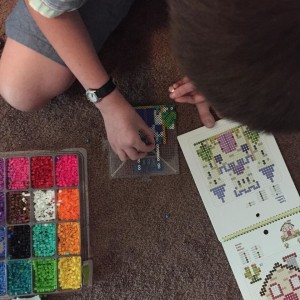 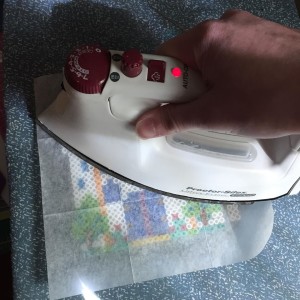 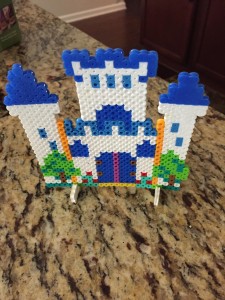 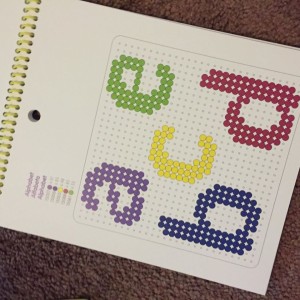 My daughter also bought a kit at the craft store to work on while the boys were using this book.  She found a jewelry making kit made out of the same beads! 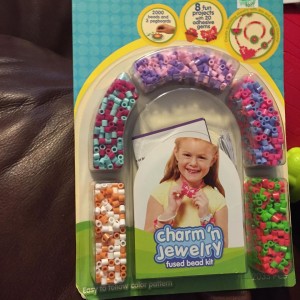 So she happily got to work making a necklace. 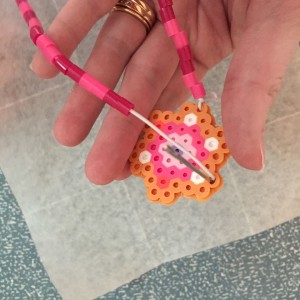 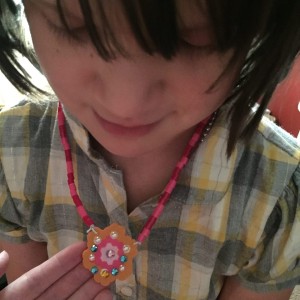 The only caution (other than the beads are not meant for very young children) is that an adult should be the one to use the hot iron.  The iron needs to be very hot in order for these beads to fuse.  This took very little time for me to melt the beads together.  Also, when you are ready to iron – take extra care with the new creation.  It is very easy to knock these beads off of their little pegboards.  The jewelry making kit was especially difficult to work with because of the stretchy string that is used to tie the charms onto the necklace.  I accidentally forgot that I didn’t want them to fuse too much – because then there was no way to push the string through.  I was able to save the charm by poking it with a sewing needle.  Just be careful at the end of the projects. 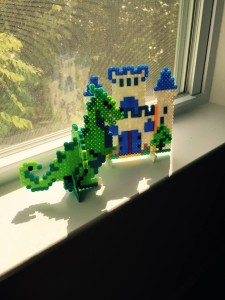 (In the spirit of full disclosure, this post does contain affiliate links, which means that I may get a commissions if you decide to purchase anything from the following links. I only recommend products that I use and love myself!)